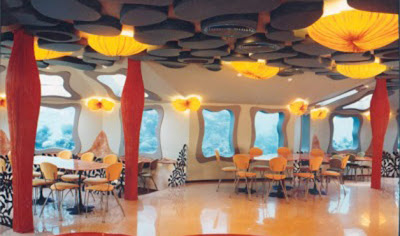 In the water of the Red Sea, seventy meters off the shore of Eilat, a unique underwater attraction was created - the Red Sea Star - the only underwater restaurant and bar in the world.

At the Red Sea Star you can enjoy :-

Exotic and delicious seafood and meat dishes in the underwater restaurant, while merging with the amazing underwater sea world in its natural surrounding.A large selection of drinks and beverages in a romantic peaceful atmosphere at the unique underwater bar. Wining, dining and partying in style to the sound of music of the 60s, 70s and 80s in the "Metro Bar" our upper dance bar on the beautiful wooden deck, ten meters above the sea level, overlooking the magical view of the Gulf of Aqaba and the Edom mountains.

Situated on the entrance floor of the Red Sea Star is a modern luxurious auditorium with 90 seats, in which lectures are given to organized groups. The Red Sea Star has been receiving extensive coverage throughout the world since its establishment, especially because of the unique concept it was based on, its exceptional construction process, its fascinating interior design and the fact that it is a "green" project, which contributes profoundly to the preservation of the coral reef surrounding it. 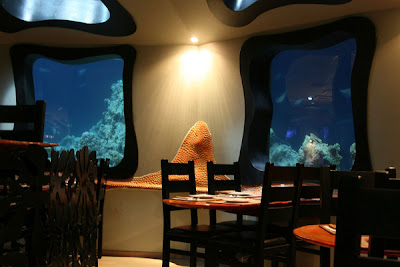 The Red Sea Star enables you to "sense the sea" through a "dry diving experience" and to discover the magnificent and exciting underwater world of the Red Sea. A breathtaking view of hundreds of various tropical sea creatures in the colorful coral garden is seen through 62 panoramic amorphous windows surrounding the observatory, located five meters below the sea level.

The Red Sea Star is probably the only night-observatory in the world. Our guests enjoy the rare sight of the aquatic kingdom at night, when the underwater garden is softly lit, without disturbing the natural inhabitants.
The Red Sea Star is a "green" project. Our marine life experts and skilled divers have been working for years to save, reconstruct, preserve and nurture the coral reef surrounding the project. 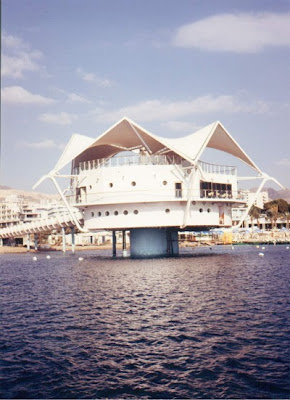 A unique, complex construction process involving approximately 6,000 tons of steel and concrete
The Red Sea Star was designed by the architect Sefi Kiryaty. The structural calculations and design were done by the engineers Mr. Moshe Dreemer and Dr. Nitai Dreemer. The "Star's" steel sections were fabricated by the Kadmani Metal Works in the north of Israel between 1995 and 1996, prior to their transportation to Eilat in three separate truck convoys. In the port of Eilat the sections were welded together to create three massive structural units.

The restaurant level, weighing approximately 110 tons, is star-shaped in plan to maximize the interior space and afford a window seat for almost every guest. The restaurant level has 62 windows of varying sizes built into the walls and ceiling. Very few manufacturers anywhere in the world were capable of producing the windows, which had to be specially designed to withstand the enormous pressure of the seawater bearing on them. The windows, which weigh twelve tons, were imported from Japan.

Two floors above sea level: the entrance level, including the entrance lobby, coffee shop, an area designated for a souvenir shop, an auditorium and kitchens, and the mezzanine level with offices and rest rooms. This unit weighs approximately 120 tons. In the port, the units were lowered into the sea one on top of the other by a gigantic, 600 ton crane brought to Israel from Belgium for the purpose. Once final welding had been completed to connect the three units, the completed structure was towed by two sea-going tugs a distance of some two kilometers to its final site. The structure was erected like a ship and the sight of the gigantic tower floating on the surface of the water was astonishing. At the permanent site of the building, about 4,000 tons of concrete were poured into the base under water to sink the structure to the seabed. There it was anchored to thirty-four 20-inch diameter piles, which were driven through the structural base into the seabed to a depth of about 15 meters and then filled with concrete. The very heavy finished structure weighs 6,000 tons and is designed to withstand even earthquakes. 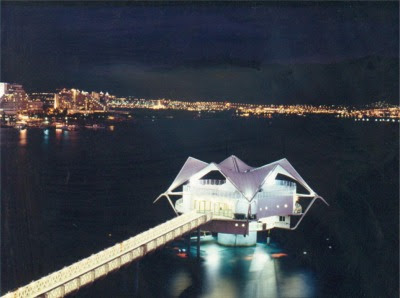 The "Star" is reached by crossing a 70-meter long bridge which connects it to the shore between the "Le Meridien" and "Ha'Sela Ha'adom" (Red Rock) hotels.


The only restaurant in the world where guests can eat underwater while observing hundreds of sea creatures in their natural surrounding - by day or night...

An underwater gastronomic experience is waiting for you, about 5 meters below sea level, in the restaurant of the Red Sea Star. Enjoy a wide variety of exotic dishes in a magical atmosphere of beauty and peace, while observing through giant windows the colorful underwater coral garden and an endless shifting panorama of marine life in all their kaleidoscopic splendor. Next to almost every table in the restaurant there are two personal windows through which guests can observe the underwater surrounding - one in the wall, to which the table is attached, and the other in the ceiling above it. The restaurant of the Red Sea Star has a very rich and exclusive menu, including fish, meet etc. 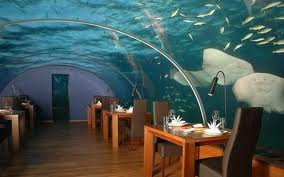 At night the underwater garden surrounding the "Star" is softly lit, without disturbing its natural inhabitants (using specific light colors, specific wave length etc.), offering the visitors a unique "dry diving" experience at night as they eat. Ultimately, it all adds up to a wonderful exotic feast of the senses, which is simply unforgettable - a superior pleasure of colors and tastes.


An intimate atmosphere of beauty and tranquility. The exclusive underwater bar, located next to the restaurant, offers a large selection of cocktails and alcoholic drinks, soft drinks and hot drinks in a romantic and magical atmosphere. The bar of the Red Sea Star differs in its essence from any other bar in Eilat. Its calm serenity allows for an intimate atmosphere, perfect for having conversations without any disturbance. 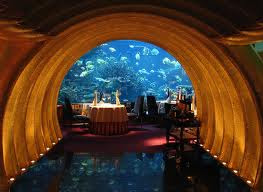 The underwater bar is the perfect place to conduct a business meeting, to impress a new date or simply to enjoy a romantic evening in a unique atmosphere.


An outdoor dance bar. On the roof of the Red Sea Star, about 10 meters above sea level, the "Metro Bar" is located. In the "Metro Bar", which is designed as a deck of a ship, one can enjoy the fresh air of the sea, a pleasant breeze and the glowing lights of the cities of Eilat and Aqaba. The guests in this floor experience the enjoyable feeling of sailing at sea, without enduring the encumbrance of sea travel.

The "Metro Bar" is an attractive high quality alternative to the noisy discotheques of Eilat. Here, you can dance in style to the music of the 60s, 70 and 80s, played by the well known D.J. Gil Almaliach ("Gil Music"), watch satellite broadcasts ("YES"), or drink a glass of beer or other alcoholic drinks with friends, when sitting next to wooden tables. All this, while eating and enjoying the amazing view seen from the roof of the Red Sea Star, which is a spectacular observation point of the whole region. It is impossible to describe the breathtaking view observed from the deck of the "Metro Bar". One must see and feel for oneself the stunning sunsets that color the sky in red, the amazing view of the Edom mountains and the glowing lights of the cities of Eilat and Aqaba at night, that all add to the romantic and magical atmosphere. 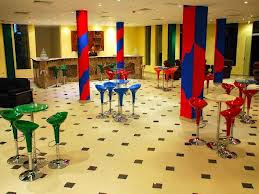 The "Metro Bar" is a wonderful place to have unique private parties, cocktail parties and receptions of up to 300 guests.


A "green" project based on environmental preservation

The Red Sea Star is an environmentally friendly project that exists in harmony with its natural environment. Going even further than that, it has contributed and continues to contribute to the care and conservation of that environment.

Until some twenty years ago, the north shore of the Gulf of Eilat, in the area of the "Star", was the site of an active and colorful coral reef. Regretfully, the reef was subjected to severe damage in the course of the years through a variety of human activities, including pouring sewage effluent into the sea that polluted the area, waste disposal, construction and site development work, swimming and under-water diving, to the point where the delicate reef and its denizens were almost totally annihilated. At the start of construction, the seabed at the site of the "Star" was desolate and barren as a desert. We joined a broad-scale rescue project, still in process, to rebuild and take care of the wonderful coral reef that had been destroyed. We succeeded beyond our expectations, a fact that can be verified by gazing at the enchanted scene revealed through the windows of the "Star". 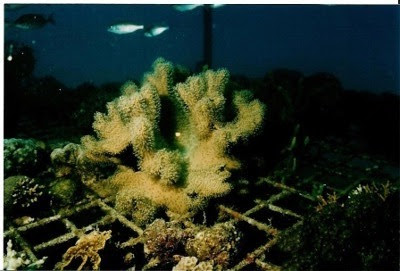 Over a period of four years prior to the opening of the "Star" to the general public, the coral reef has been recreated, rehabilitated and tended by a team of "Star" divers under the supervision of a marine biology specialist, in cooperation with the National Parks and Nature Preserves Authority. The "Star" people established an underwater plant nursery at a depth of 20 meters below sea level, where they looked after the cultivation of the corals. With much love they set them at the proper angles with respect to the sun, cleaned them of predators, separated aggressive from passive coral species and created optimum conditions for their growth, so that their rate of growth was several-fold that of natural growth. Just before the opening of the project to the public, the corals were transferred from the nursery to the area around the underwater building level at the site. Then the "Star's" divers brought rocks and colonies of damaged corals from other parts of the Red Sea, where the chance for survival of those corals was extremely poor, thus saving them from extinction. 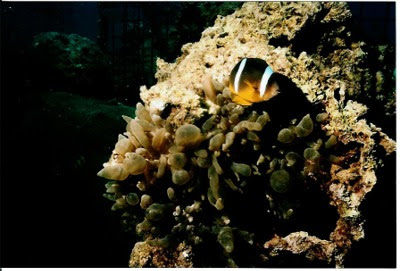 The results of the enormous effort, the dedicated loving care and the investment in the underwater garden were not long in making their appearance. More than 70% of the corals "took" and developed. In their wake came many fish of various types, including some that hadn't been seen in the area for decades, which have now "come home."

The "Star's" team of divers is continuing its regular work of preserving and caring for the natural environment. Its efforts include protection of the reef surrounding the underwater level of the site from potential coral predators (such as mollusks and various types of snails), cleaning the coral of sediment that floats down through the water, settles on the corals and suffocates them, etc. Moreover, as a consequence of the remoteness of the site from public swimming and underwater diving areas, natural propagation has been proceeding undisturbed so that in the spring and summer seasons, the addition of many young fish is expected.

In the open sea, nobody will care for the corals but the corals themselves, however their own sources of energy are not always sufficient for the task. It is for this reason, that our work is so important and it is thanks to this work that visitors of the Red Sea Star are able to enjoy a view of the dynamic, colorful undersea world, a world in which school after school of exotic fish enters and exits the coral garden surrounding the site, which is even visited now and then by larger marine life forms, including sea turtles, dolphins and others.

Email ThisBlogThis!Share to TwitterShare to FacebookShare to Pinterest
Labels: Israel

We Speak Your Language